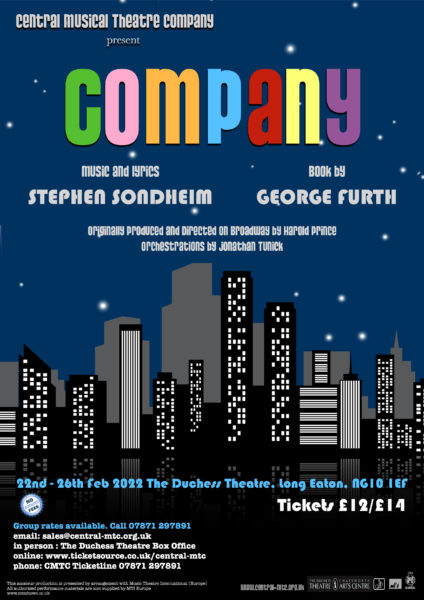 Central Musical Theatre Company are delighted to finally be performing this Stephen Sondheim musical. After several false starts and heartbreaking cancellations  we are looking forward to welcoming you to COMPANY, only the second show we will have performed at our new home, the Duchess Theatre in Long Eaton. Company is a 1970 musical comedy with music and lyrics by Stephen Sondheim and book by George Furth. The original production was nominated for a record-setting fourteen Tony Awards and won six.

Originally titled Threes, its plot revolves around Robert (a single man unable to commit fully to a steady relationship, let alone marriage), the five married couples who are his best friends, and his three girlfriends. Unlike most book musicals, which follow a clearly delineated plot, Company is a concept musical composed of short vignettes, presented in no particular chronological order, linked by a celebration for Robert’s 35th birthday.

Company was among the first musicals to deal with adult themes and relationships. As Sondheim puts it, “Broadway theatre has been for many years supported by upper-middle-class people with upper-middle-class problems. These people really want to escape that world when they go to the theatre, and then here we are with Company talking about how we’re going to bring it right back in their faces”.

If you would like some more information on the show itself, check out their official site…